The new Gen-X7 includes a 6-32 Steel Set Screw designed to keep tension on the internal screw cap. This will minimize the chance of the screw cap from rocking loose in Mode 1 or Mode 2 operations. However, a proper periodic maintenance check is still highly recommended. The tension is preset at the factory, but you can make fine adjustments with the included 1/16" allen wrench. Constructed from 6061 aircraft aluminum with hard coat anodizing.
Position one acts in the same way as any of the other bullet button style locks in that the magazine can only be removed with the use of a tool.

Position two allows the AR Raddlock to be activated with a press of the finger, just like a standard magazine release button. Position two is perfect for shooting outside of California or when using a .22 rimfire upper. Never use position two inside California with a centerfire upper and any banned features installed on your rifle. Doing so would construct a banned assault weapon and is punishable by law.

* This product does NOT comply with 2017 California Assault Weapon laws! This Lock Kit has Not been approved by CA DOJ.

Want to own and shoot what the politicians call an "assault weapon" legally in California?

RaddLock makes easy-to-install-yourself kits that make your off-list semi-automatic centerfire rifles California-compliant, turning them into "fixed magazine" rifles which are not subject to the Roberti-Roos Assault Weapons Control Act of 1989.

RaddLock's design philosophy is to make these kits as unobtrusive as possible and fully-reversible so that you can enjoy the both the form and function of your rifle as it was meant to be. 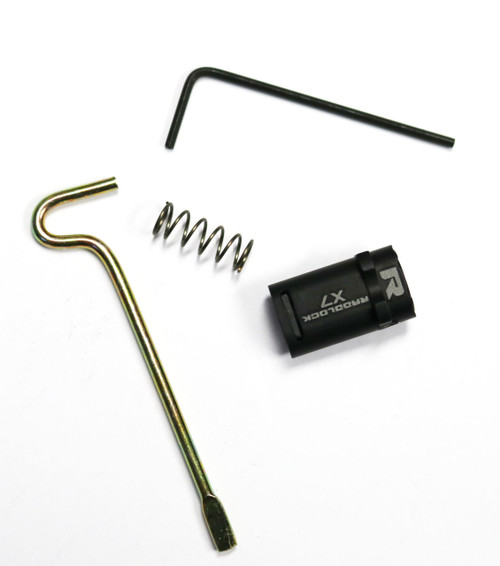 Thank you for visiting.  We always appreciate your business.